I mentioned in my business blog that it has been a crazy work week for me, so I haven’t been able to blog…Buuut the weekend is finally here so I can enjoy my coffee (while the kids run around screaming with Rory) and listen to my music in my jammies…

Last weekend, after church the kids decided to make one of their favorite characters (Well…one of MY favorite characters…) from Star Wars. Boba Fett. Yay! My kids rock. I just thought it was so cool because kids these days don’t sit and make things out of paper anymore…they need flashing cartoons and loud toys. However, there was a giant fight afterward as to who got to own this awesome creation…Guess everything can’t be perfect all the time.

Starla gets her new bike tomorrow so I will be sure to post a bunch of pictures for everyone! Also, hello and welcome to all of my family who has found me here and commented. ♥

Every month in Starla’s class they have reading goals of 30 books/chapters a month. April isn’t even over yet and she is well over 30. Each one of the flowers represents 5 books/chapters. YeeeeAH… Starla pretty much rocked it this month. They have had to start over-lapping her flowers. ♥ (Click the picture to see it larger)

The weekend went by too fast, as always. I am very ready for sleep, I have to get up extra early tomorrow, but before I do I wanted to blog the cutest conversation with Starla…One of those “Mom Moments”, ya know?

After dinner, Starla was looking at an empty cream soda bottle and said we could put water in it. (Starla is learning about recycling in school) Then she mentioned “Reuse reduce recycle”. As she was looking over the empty bottle, no doubt ideas running wild of how she could reuse this bottle, she read “No refill” along the bottles side…

Me: “Guess we can’t reuse it then”

Starla: “Well we can’t in the store, but we can at home because nobody can see us”. 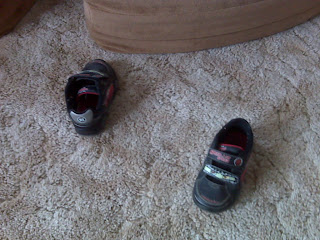 Trent INSISTED I take a picture of his play shoes in front of the “round couch” before he would take his bath… He meant business. He even had to double check too make sure I took the picture correctly… ♥

Fruit instead of ice cream??

Yesterday Starla came home from school with more energy than needed… So I thought we would walk to the grocery store…And to my amazement, my little girl pick buying fruit over ice cream. Plus ten for me! I’m trying to lose weight (who isn’t?) so the fruit change is a nice one…Although I still polished off dinner with a King Size Nutrageous…However! Starla and I went on our first bike ride together yesterday, after our fruit feast ♥

Trent on the other hand, he refused the fruit AND the playing outside and just wanted to “study” Star Wars. He just turned four in August and can’t read yet, but he sure fakes it pretty well! (And yeah, that couch is seriously awesome…)

I have been a smoker for nearly half of my life now. Wow. I swore when I turned 25 I would quit. I turned 25 almost six months ago… Last Friday, April 17th, I came across a website WhyQuit.com and it honestly inspired me to quit smoking. I mean, I have been trying to quit for six months now…but for the first time, I felt empowered to quit. So I made it through Saturday, Sunday AND Monday without smoking. I drank a lot of fluids (they say drinking juice helps) but cracked yesterday and smoked…however, I’ve made it through today smoke free! (Little bit of an update…I totally broke and got into an argument and smoked. *sigh* But I am trying again and taking each day as it comes!)

I’ve never smoked in my house, around my kids, in the car with the kids…yeah, I’ve made it that difficult to smoke and I smoked on average five to ten cigarettes a day. I never smoked while I was pregnant, either. One would *think* quitting would be easy…No. Not at all. At night I get extreme headaches and I can’t sleep. I’ve gained weight already and my stomach has the worst pains when I wake in the morning. It sucks. Rory says it will pass, and I know eventually it will, but it hurts. It seriously hurts. I try to justify in my head that smoking only one at night would be okay, but I know even that one single smoke will keep the cycle going.

I can’t even imagine what it would be like not craving a cigarette, or even thinking about one during times of boredom and stress. Smoking is my five minutes of ME time…my five minutes where no one will bother me…See, there I go, trying to justify it again…

I’ve talked to my daughter about smoking and instead of hiding my struggle, I have talked to her about what smoking can do to you and what it feels like to be addicted. She is a wonderful inspiration, telling me she knows I can quit and congratulating me when I make it through the entire day smoke free. ♥

And he can’t even read yet… 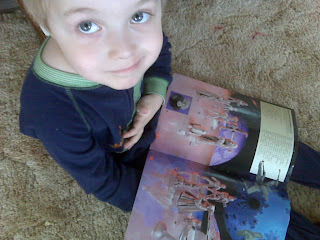 My son, Trent, is IN LOVE with Star Wars. It is quit admirable to see a four year old devoted to something with such an in depth and complicated story line. Trent can name the characters, ships, weapons… I have to admit, I think Rory has nudged his son down this path a bit…Regardless, the past few mornings, Trent has been “reading” Star Wars Insider magazines (from the early 1990’s) and it is SO cute how carefully he turns each and every page…I imagine his father read through these magazines much in the same way. ♥